Having developed a coordinate system and measurement techniques for the Earth, the next problem map makers faced was how to transfer the information from the surface of a 3 dimensional (3D or spherical), irregularly shaped sphere (the Earth) to a 2-dimensional (2D or flat) ‘piece of paper’.  This is not a simple as it sounds.

The images of the Earth as it might be seen from space, gives a good indication of the complexity of the problem facing map makers when it comes to converting the surface of a sphere on to a flat ‘piece of paper’.  These seven images are viewed over the Equator.  In each of these views the central area is clear, but at the edges shapes are distorted.

Beyond the Equator you need to twist your point of view to look directly at the area you are interested in.  By way of example, note the way that Arctic, Antarctica and Australia appear on these views compared to when you look at them from the Equator (see above images).

Over many centuries a vast number of techniques (often involving very complex mathematical formulae and models) have been developed to do just this.  These are called projections.  Projections are generally given a name so that they can be easily identified and referenced on a map.  They are often named after the person(s) who invented them (eg Mercator); or aspects of the projection (eg Equidistant Conic); or a combination of the two (eg Lambert Conformal Conic).

The only ‘projection’ which has all features with no distortion is a globe.

There is no one perfect projection and a map maker must choose the one which best suits their needs.

Explaining Some Jargon – Projections and Maps

These are two terms which are commonly confused and the difference is simple:

A projection is a system of mathematics and geometry whereby the information on the surface of a sphere (the Earth) is able to be transferred onto a flat piece of paper (a map).

There are two ways that projections are classified:
»   Basic Type: depends on the characteristic that is preserved
»   Basic Technique:depends on the method used to project features onto a flat surface

Projections are described by referring both of these.

This describes how a map shows the positional relationship between two features, and their size and shape.  Depending on their intended use, projections are chosen to preserve a particular relationship or characteristic.  These include:

This describes the way an imaginary piece of paper (which will become the map) is laid on the Earth to obtain the latitude and longitude for the map.

Where the imaginary ‘piece of paper’ touches the Earth there is no distortion on the map.  As you move away from there however, distortions increase with distance.  Because of this, map makers usually choose for the piece of paper to touch the Earth in the middle of a map – thereby minimising the amount of distortion.

Using this concept of an imaginary ‘piece of paper’ touching the Earth there are three basic techniques used to create a projection and therefore a map.  These are:

These basic techniques have different distortions and therefore limitations to their use – see below for descriptions of these.  Each technique type has a region of the Earth where it is usually used.  However, any of the three projection techniques can be used for any area of the Earth. 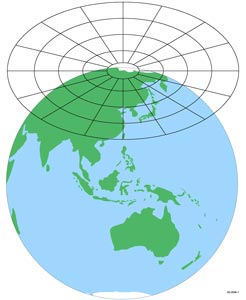 This projection is based on a ‘flat piece of paper’ touching the Earth at a point.  The point is usually a Pole, but this is not essential.

Azimuth is a mathematical concept with relates to the relationship between a point and the ‘flat piece of paper’ that ’touches‘ the Earth.  It is usually measured as an angle.  The word itself is believed to have come from an Arabic word mean the way – referring to the way or direction a person faces. 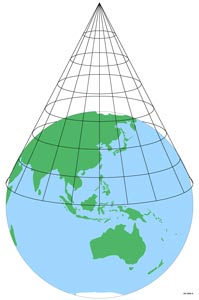 This projection is based on the concept of the ‘piece of paper’ being rolled into a cone shape and touching the Earth on a circular line.  Most commonly, the tip of the cone is positioned over a Pole and the line where the cone touches the earth is a line of latitude; but this is not essential.  The line of latitude where the cone touches the Earth is called a Standard Parallel.

Conic projections are usually used for regional ⁄ national maps of mid-latitude areas – such as Australia and the United States of America. 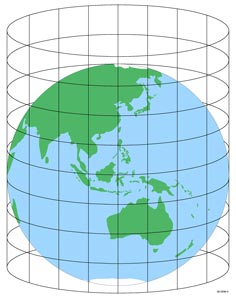 This projection is based on the concept of the ‘piece of paper’ being rolled into a cylinder and touching the Earth on a circular line.  The cylinder is usually positioned over the Equator, but this is not essential.

Cylindrical projections are usually used for world maps or regional ⁄ national maps of Equatorial areas – such as Papua New Guinea.

The first Cylindrical Projections developed had the lines of latitude and lines of longitude shown as straight lines – see the section on the Mercator projection.

With advances in computers it became possible to calculate the lines of longitude as curves – thereby reducing distortions near the Poles – see the section on the Robinson projection.

Its all in the name

A projection’s name is often a good indicator of some of its properties.

Firstly
Projections are often named after their creator – famous names include Albers, Lambert, Mercator and Robinson.  However, without inside knowledge, this gives no indication of the properties of a projection.

Secondly
The projection name may refer to some of its attributes – quite commonly Equal-Area, Conformal and Equidistant are included in a projection’s name.

Thirdly
The projection name may refer to its source technique – conic and azimuthal are the one which is most commonly used here.  (There is an element of assumption that a projection is cylindrical if not otherwise stated.)

Variations to these Basic Techniques

The techniques described above are in their simplest form.  From here it gets more complicated.  The array of mathematical and geometric variations to these basic techniques described above is only limited by the imagination of the projection’s creator and their capacity to calculate complex formulae (in the modern era this is made simpler by the use of advanced computers).

Some (but far from all) of variations to the three basic techniques are:

Using this conic projection as an example, the 'piece of paper' appears to 'slice through' the Earth – thereby touching the surface of the Earth in two places and creating two Standard Parallels. 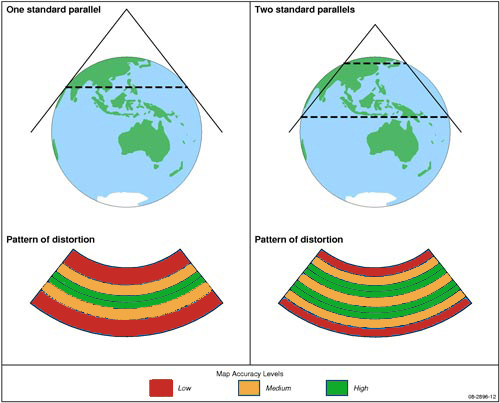 When placing the Standard Parallels, it is best to have them about 1 ⁄ 4 to 1 ⁄ 3 of the way in from the edge of the map – this minimises the distortion across the map.  For example, in the case of a map of Australia which extends from about 10° to 45° South the Standard Parallels most commonly used are 18° and 36° South.

Merits and Limitations of Projections

As stated above, no projection is able to accurately show the correct compass direction, distance, shape and area of all features depicted on it.  Because of this, each projection has advantages and disadvantages, as well as serving different purposes and producing different types of distortions.

As a general rule, maps of local areas have less distortions than those of larger areas or the world.

Many special projections have been developed to specifically overcome some of these distortions.  For example:

As a general rule the best projection to use is dictated by the map's:

When selecting a projection, map makers should also consider national conventions and consistency with other maps of an area.

The USA Geological Survey (USGS) has produced a particularly useful poster which summarises the merits and shortcomings of a selection of commonly used projections: http://egsc.usgs.gov/isb//pubs/MapProjections/projections.html. A PDF version of the web page is also available.